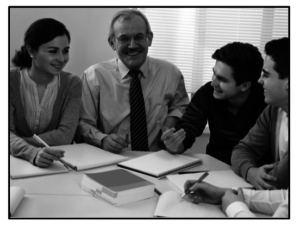 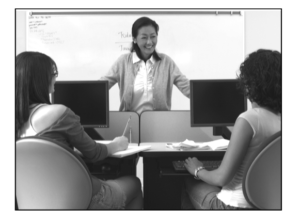 Listen to a discussion in a business class.

M1: The computerized workplace can be hazardous to your health if you don’t take preventative measures. Today we’ll go over what some of these hazards are, and more importantly, what can be done about them. One major complaint—maybe the biggest complaint—of people who spend time at the computer is eyestrain. To help ease the strain on the eyes, the computer screen should be about two feet from your eyes. The entire screen should be in focus. The brightness and contrast should be adjusted for best readability. A good way to relieve eyestrain is to look away from the screen frequently. Focus your eyes on objects that are far away, like something outside—the building across the street or the tree in the parking lot.

W: But what if your office doesn’t have a window? I mean, I’ve worked in lots of places where there’s no window.

M1: Then in that case, you need to get up and walk around. You should never sit for more than 30 minutes at a time anyway. This is important for the rest of your body as well, namely your back. Neck and back pain are a big problem for computer people. Always make sure your screen, keyboard, and chair are at the right height for you.

M2: I think it’s important to have a comfortable chair, one that sort of shifts your weight a little bit forward. I put a cushion on my chair, and that really helps my lower back.

M1: That’s not a bad idea. The right chair is a must, the right posture as well. Remember what your mother told you—sit up straight, with your feet on the floor. Another thing I wanted to talk about is air pollution in the workplace—sorry, did you have a question, Martha?

W: I’ve heard that copy machines are bad for you. Is there anything to this?

M1: It’s true. Almost all photocopiers give off some ozone. However, the amount is usually less than what’s considered hazardous. Most machines have an ozone filter, but this can still leak if the machine’s not properly maintained. If you can smell a sort of electrical odor coming from the machine, it’s a sign that it’s giving off too much ozone.

1. What is the discussion mainly about?

2. What does the instructor recommend for relieving eyestrain?

3. According to the discussion, why is it important to have the right chair?

4. According to the instructor, what health problem is associated with copy machines?

5. Where in the workplace might ozone be a problem?

Listen to a lecture given to students in a tourism program.

Why do people travel to distant lands? Many centuries ago, the reasons for travel were primarily economic or political. The idea of traveling for personal enrichment is fairly modern, only a few centuries old, and traveling just for adventure is even newer.

Humans have always traveled across the earth. Early hunting–gathering people migrated in search of resources to sustain themselves. Later, after the spread of civilization, traders journeyed throughout Europe, North Africa, and the Middle East in search of perfumes, spices and other goods. Vikings traveled across the seas in search of fish, timber, and other natural resources. Europeans explored Africa and the Americas, conquering other civilizations and establishing colonies. These activities—the search for resources, the growth of trade, conquest and colonization—all stimulated the growth of tourism.

While the earliest tourists traveled in search of resources, later tourists took trips for cultural, educational, and scientific purposes. During the seventeenth century, the young members of Europe’s wealthy classes took “grand tours” through Europe to learn about languages, theater, music, and art. Beginning in the nineteenth century, naturalists like Charles Darwin studied animal and plant species in exotic places. Darwin’s travels created interest in traveling for scientific advancement. In the early twentieth century, John Muir began to write about his wanderings through the southern United States, Alaska, and India, and his writings inspired people to preserve the natural world. Other travel heroes, such as Ernest Hemingway, wrote of their African safaris to hunt big game, and this exposed people to the possibilities of journeying to faraway places for adventure.

The tourists of today take trips purely for pleasure, recreation, adventure, and, of course, personal growth. Many travelers now seek out the most distant places and the most unusual cultures. We can see this in ethnic tourism, a contemporary version of cultural tourism that includes visits to traditional villages and people’s homes to observe social customs, see native arts and crafts, and watch local ceremonies, and so on. Ethnic tourism helps preserve aboriginal cultures that might otherwise be endangered by assimilation into the larger society. In fact, ethnic tourism allows us to enjoy folk dances and songs and ceremonies that might otherwise be lost.

6. What is the main topic of the lecture?

7. According to the professor, what is the main reason that people traveled many centuries ago?

8. According to the professor, which of the following originated in the past two centuries?

9. What does the professor say about ethnic tourism?

10. What is the main point made in the lecture?