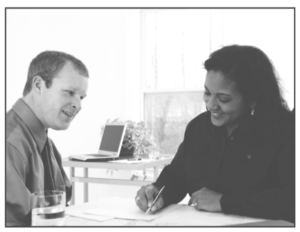 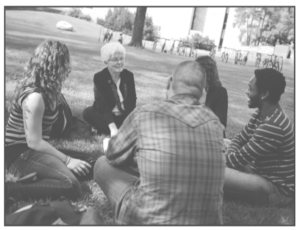 Listen to a conversation in a university office.

M: Jackie, I wonder if I could talk to you about something.

M: There’s an opening at channel 12 that kind of interests me—an internship. I was kind of thinking of applying for it.

W: You mean the television station? What sort of job? Oh, I hope that doesn’t mean you’ll have to leave us! No, no, I wouldn’t quit my job. It’s a part–time internship for production assistant. Production work, general stuff … probably mostly I’d be a gofer.

M: Anyway, it’d be a way in the door. Unfortunately, it’s not a paid internship, but that doesn’t matter. It’s the experience—the chance to work in television—that’s more important to me right now. Some day I’d like to write, or produce. I probably don’t stand much of a chance, though. I’m sure there’ll be lots of other people who apply, with more qualifications than me.

W: Don’t be so sure about that. You never know. Sometimes it’s not the credentials but the person who matters. My friend got a really good job in the mayor’s off ice—public relations, a power position— and before that the only work she’d done was emergency rescue—evacuating people in helicopters! Flood victims, accidents and the like. And then she goes and lands this glamour job in the mayor’s office, with no experience in politics whatsoever!

W: Yeah. So you can never tell.

M: Still, I’m going to need all the help I can get. If I could only … uh … convince them of how much—I need them to know how much this would mean to me. I was wondering, Jackie, if you….

W: You want a recommendation?

W: I’d be happy to do what I can. I feel I know your work pretty well. Here in the lab you’ve always been good at troubleshooting, and helping people figure out their e–mail. I can emphasize that in the letter. When do you need this?

M: Um … by the end of the week? The application is due next Tuesday.

W: All right, Alex. I hope this will work out for you. M: If not this, then something else.

W: There you go. That’s the spirit!

1. What is the conversation mainly about?

2. Why does the man want to get the internship?

3. What does the man imply when he says this: “I probably don’t stand much of a chance, though. I’m sure there’ll be lots of other people who apply, with more qualifications than me.”

4. Why does the woman tell a story about her friend?

5. What does the man want the woman to do?

A naturalist has been invited to speak to the members of a college hiking club. Listen to part of the discussion.

W1: Because of their protected status, a lot of bears have lost their fear of people. This may make them appear tame, but they’re still potentially very dangerous. Bears are wild animals. One or two bear attacks occur each year in Glacier Park. The majority of attacks occur because people have surprised the bear.

M: What should we do if we surprise a bear?

W1: You should try to avoid encounters in the first place by being alert. And make noise. Talk loud. Holler. Bears will usually move out of the way if they hear people approaching.

W2: Some people say to carry bells, or put bells on your pack.

W1: Most bells—even the so–called bear bells—are not loud enough. Calling out or clapping hands at regular intervals are better ways to make your presence known.

M: But isn’t it kind of rude to make a lot of noise in the woods? I mean, people go there for peace and quiet.

W1: In bear country, noise is good for you. Hiking quietly endangers you, the bear, and other hikers. People sometimes assume they don’t have to make noise while hiking on a well–used trail. Some of the most frequently used trails in Glacier Park are surrounded by excellent bear habitat. You can’t predict when and where bears might appear along a trail.

M: That’s for sure. I remember my surprise when a black bear charged me. It must have been running away from hikers who surprised it on the trail ahead of me.

W1: Don’t assume a bear’s hearing is any better than your own. Some trail conditions make it hard for bears to see, hear, or smell approaching hikers. You should be especially careful near streams, against the wind, or in dense vegetation. Stay with your group and, if possible, avoid hiking early in the morning, late in the day, or after dark, when bears are more likely to be active. Bears spend a lot of time eating, so avoid hiking in areas like berry patches or fields of glacier lilies.

W2: How will the bear act if we surprise it?

W1: Bears react differently to each situation. They mayappear to tolerate you, and then attack without warning. The most important advice I can give you is never to approach a bear intentionally. Each bear will react differently, and its behavior can’t be predicted. All bears are dangerous and should be respected equally.

6. What is the discussion mainly about?

7. What does the naturalist think of bear bells?

8. Listen again to part of the discussion. Then answer the question.

“Don’t assume a bear’s hearing is any better than your own. Some trail conditions make it hard for bears to see, hear, or smell approaching hikers. You should be especially careful near streams, against the wind, or in dense vegetation.”

Why does the naturalist say this:

“You should be especially careful near streams, against the wind, or in dense vegetation.”

9. What can be inferred about the behavior of bears?

10. Which situations should hikers avoid?