Read the passages and choose the best answer to each question. Answer all questions about a passage on the basis of what is stated or implied in that passage.

1. Grasslands occur around the world, mostly in dry temperate or subtropical regions with relatively little rainfall, and generally as intermediate zones between drier desert and moister forest habitats. In North America, native grasslands occur primarily in the prairies of the Great Plains in the middle of the continent. The North American prairie biome is one of the most extensive grasslands in the world, extending from the edge of the Rocky Mountains in the west to the deciduous forest in the east, and from northern Mexico in the south to Canada in the north. Average annual rainfall ranges from 16 inches (40 cm) in the west to 31 inches (80 cm) in the east. Average annual temperatures range from 50 to 68 degrees Fahrenheit (10 to 20 Celsius). In the moist regions of the North American grasslands, especially in the northern Great Plains, rainfall is distinctly seasonal, and temperatures can vary widely from very hot in summer to bitter cold in winter.

2. The prairie soil is rich in nutrients derived mainly from the decomposition of the deep, many–branched grass roots. Native grasses have very long roots, with up to two–thirds of the plant growing underground. The soil beneath the prairie is a dense mat of roots. The above ground grass stems die back every winter, but the underground root system keeps the plants alive until the next growing season. Even after the roots die, their tangled mass holds the soil together, while the decaying matter provides nutrients for living plants. Animals also contribute to soil quality. Herds of grazing deer and elk add nitrogen from their droppings. Colonies of prairie dogs, large burrowing rodents, dig extensive underground tunnel systems that aerate the soil and allow water to reach below the surface.

3. One hundred fifty years ago, the Great Plains grasslands were one vast, unbroken prairie. Starting in the late nineteenth century, large numbers of people have immigrated to the region, altering the landscape significantly. Much of the prairie is now farmland, the most productive agricultural region in the world. The landscape is now dominated by monocultures, the cultivation of a single variety of plant covering a large area. Monocultures of wheat, barley, soybeans, corn, and sunflowers occupy the land that was once prairie. In areas given over to grazing lands for cattle and sheep, virtually all of the major native grasses have been replaced by nonnative species.

4. An important feature of the northern Great Plains grasslands is the presence of millions of glacial depressions that are now small ponds known as prairie potholes. The potholes were formed during the most recent Ice Age, when streams flowed in tunnels beneath glacially formed sandy ridges. When the Ice Age ended around 12,000 years ago, the retreating glaciers created about 25 million depressions across a 300,000–square–mile landscape, with a distribution of about 83 potholes per square mile. As the ice blocks melted, much of the water was left behind, forming wetlands ranging in size from a tenth of an acre to several acres. The wetlands were soon surrounded by waves of grasses: shortgrass, mixed grass, and tallgrass.

5. Today these small wetlands still cover the prairies, although much of the landscape, including both native grasses and potholes, has been transformed to cropland and grassland for grazing. What does remain of the wetlands, however, serves as an important breeding area for more than 300 bird species, including large numbers of migrating shorebirds and waterfowl. The potholes fill up with water during spring rains and usually dry out by late summer. Every spring, birds arrive in great numbers, including northern pintails, mallards, coots, and pied–billed grebes. Four to six million birds come to breed and feed in the seasonal wetlands that dot portions of Minnesota, Iowa, North and South Dakota, Montana, Alberta, Saskatchewan, and Manitoba. Prairie pothole country produces half of North America’s 35 to 40 million ducks and is renowned worldwide as a “duck factory.” The potholes also have an important role in flood control. Although small, the potholes can hold significant amounts of water. During periods of heavy rain and snow melt, they absorb surges of water, slowing runoff across the prairies and thereby reducing the severity of flooding in rivers.

Glossary:
biome: one of the world’s major natural communities, classified by predominant vegetation

THEORIES OF EXPERIENCE AND EDUCATION

1. In the late nineteenth century, American educators began to develop new theories about how people think and learn. Informed by the modern science of experimental psychology, these theories examined the nature of truth and emphasized the relationships among thinking, learning, knowledge, and experience. Two philosophers, William James and John Dewey, were particularly influential in developing new philosophies of education for the modern world. Both James and Dewey believed that the truth of any idea is a function of its usefulness and that experience is central to learning.

2. William James (1842–1910) was a philosopher and psychologist who believed that truth is not absolute and unchangeable; rather, it is made in actual, real–life events. In a person’s life, there are experiences that have meaning and truth for that person. Truth cannot be separated from experience, and in order to understand truth, we have to study experience itself. Thus, for James, human experience should be the primary subject of study, and he called upon thinkers to concentrate on experience instead of essences, abstractions, or universal laws.

3. James focused on what he called the “stream” of experience, the sequential course of events in our lives. He believed that human consciousness is a stream of thoughts and feelings, and that this stream of consciousness is always going on, whether we are awake or asleep. The stream consists of very complex waves of bodily sensations, desires and aversions, memories of past experiences, and determinations of the will. One wave dissolves into another gradually, like the ripples of water in a river.

4. In James’s theory, thought and experience are connected. Incoming waves of thought flow in next to outgoing waves of previous experience and thus become associated with each other. An incoming thought is “workable” only if it is meaningful and can be associated with something already in the person’s mind. James’s theory supports later theories of associative learning, which assert that new learning involves activating previous learning to find “hooks” on which to hang new information.

5. The theories of John Dewey (1859–1952), philosopher and educator, have had a tremendous impact on generations of thinkers. Dewey viewed life as a continuously reconstructive process, with experience and knowledge building on each other. He believed that learning is more than the amassing and retention of information; learning is learning how to think. Thinking is not something abstract; it is a living process that starts when old habits meet new situations.

6. For Dewey, experience cannot be separated from nature because all experience is rooted in nature. Nature is what we experience: air, stones, plants, diseases, pleasure, and suffering. Dewey believed that experience is an interaction between what a person already knows and the person’s present situation. Previous knowledge of nature interacts with the present environment, and together they lead to new knowledge that in turn will influence future experience.

7. Dewey asserted that experience is central to education; however, experience cannot be equated with education because all experiences are not necessarily educative. Experience is educative only when it contributes to the growth of the individual. It can be miseducative if it distorts the growth of further experience. It is the quality of experience that matters. Thus, productive experience is both the means and the goal of education. Dewey felt that education should be problem–centered and interdisciplinary rather than subject–centered and fragmented. The methods and curricula of education must make the child’s growth the central concern. Furthermore, truly progressive education must involve the participation of the learner in directing the learning experience. 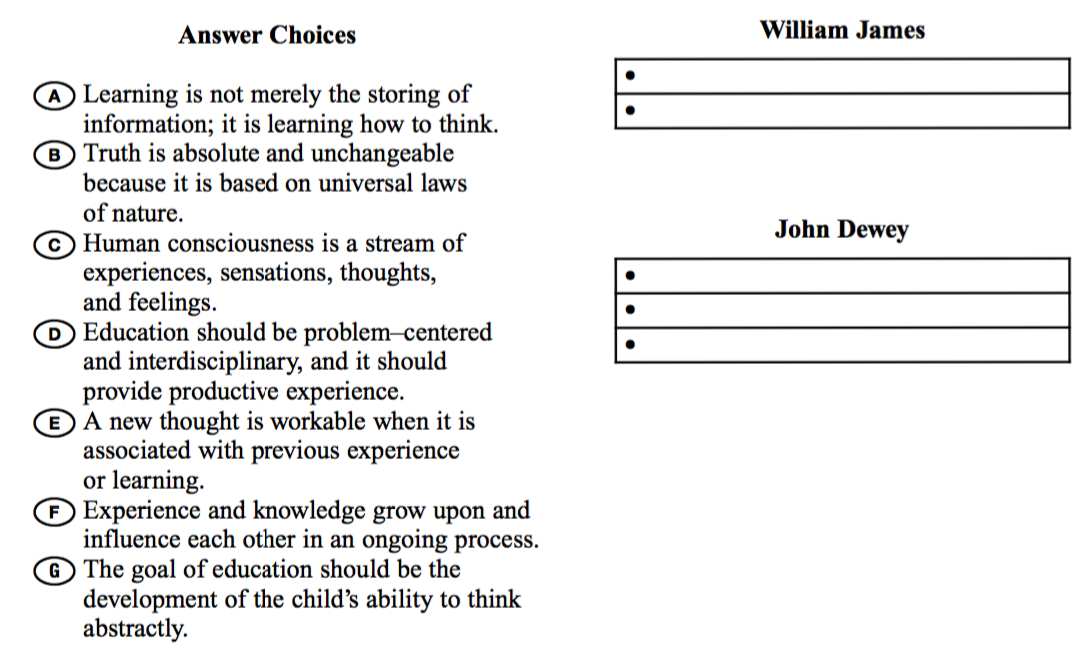 Check your answer for Question 22

William James: C,E
He believed that human consciousness is a stream of thoughts and feelings…waves of bodily sensations… memories of past experiences…; An incoming thought is “workable” only if it is meaningful and can be associated with something already in the person’s mind.

John Dewey: A,D,F
…learning is more than the amassing and retention of information; learning is learning how to think; Dewey felt that education should be problem–centered and interdisciplinary…productive experience is both the means and the goal of education; Dewey viewed life as a continuously reconstructive process, with experience and knowledge building on each other.

Answers (B) and (G) are not mentioned.